Satguru Darshan Das
Unsoiled,
Unsullied
and Pure is the Guru,
None approaches Him
in Greatness and Glory.
He is the Creator,
He is the Doer.
All Glory and Praise is His,
Highest of all,
The Inaccessible One,
beyond Words and Wisdom
Is Guru’s Praise. 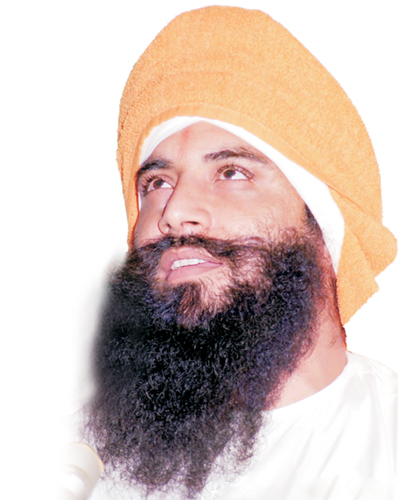 Life
"Love is a very great power and so is Truth. Those who have churned the Truth out of love can enjoy peace of mind and true Joy."

August 15, 1971, few people took notice of a divine light but he was not merely another sant with divine powers. He was on a mission to introduce an ancient path of spirituality. Before he passed away on 11 November 1987, at the age of 34, His mission proved successful. He had founded Sachkhand Nanak Dham and Das Dharam. And saw them grow into a worldwide confederation of more than 200 main spiritual centers.

His Holiness was born on 7th December 1953, to a Brahmin family of Pt. Jagan Nath and Mata Chanan Dei in Batala, Punjab (India). His Holiness Mahraz Darshan Das got enlightened at the age of 17 years on August 15, 1971. From that day onwards, His Holiness’s spiritual duties commenced. When His Holiness held His spiritual discourses, the congregation would be overwhelmed by His immense spiritual aura. He had healing powers and it was soon known that whatever He said came true. He worked with unlimited capacity, used to awake till midnight to quench the spiritual thirst of devotees about God. He held spiritual discourses in hundreds of villages and small towns of Punjab. He extensively traveled on Motorcycle to meet the craving souls. And soon He became famous as “Motorcycle Waala Baba”. Teachings were spread by His Holiness not only to every corner of Punjab but at distant places of India also. To accommodate the masses of the people who came to listen to His discourses, Spiritual Centers were constructed.

In 1973, His Holiness established first Darbar Sahib at Batala, Punjab. He encouraged people to recognize their true self and fulfill the worldly duties within the conformity of family life as He had done. He got married to Raj Mata Usha Ji on 4th March 1976 in Kapoorthala, Punjab. He established the second Darbar Sahib, the Loni Darbar on 30th January 1977 in Ghaziabad (U.P.). It was there on 16th February 1980 He founded ‘Das Dharam’, a practical message of Sachkhand Nanak Dham. After establishing Darbars in India, His Holiness turned His attention to other parts of the World. He started visiting England in 1978, awakening the people from the great slumber of forgetfulness, irreligiousness and instilling their hearts with the love of God. It was in September 1982 that His Holiness first opened the gates of the third Darbar in Birmingham, England. From there, the teachings of His Holiness reached England, Canada, America and Europe.


His Holiness left for His heavenly abode at the age of thirty-four on 11th November 1987 while giving the message of world peace and working towards preserving the unity of our Motherland India. The sacrifice of the Supreme Sant brought peace to the world.


His Holiness Mahraz Darshan Das was not a mere Sant, He was God incarnate. He did not simply reform the society, He spiritually charged it with faith, virtue, and integrity. His life and work speak for itself.


" You should be free like the bee, which sips honey from a pot without getting its wings wet or like the duck, which departs from its watery world with dry wings. Similarly, you can detach your self from worldly attachments. "
Spirituality
" Unless and untill the mind can be controlled, the soul can not find release and unite with God. This can be made easy through a Master, who shows you the true path. "

Through His discourses, He showed true path to all His followers This True Path is the God Realization. He bestowed the sacred Naam Shabad(Guru Mantra) upon them. Mahraz ji inspired people to take shelter of a Perfect Master who is able to lead them to the heaven of God by bestowing the Naam Shabad. In His own words…….

“ The peace and joy that you seek can only be attained from the shelter of a spiritual master and Naam. ”


To quench the spiritual thirst of the seekers after truth, His Holiness composed several holy shabads. His most significant composition was our divine holy book the “Yashwanti Niradhar Dham 1” a collection of divine shabads (hymns) which spoke of reverence and love for the God. It is the best interpreter of God to man.

“ Don’t be deaf, Listen to Good things Don’t think of taking, Think of giving. Perform the tasks, to benefit others Don’t say words to break the hearts, Say words to mend hearts Don’t, destroy but to build. ”


He proclaimed that the highest and the most important duty in this world is to help our fellow beings. We should serve others without any expectation. He established Das Dharam to serve humanity. Receiving Huzur Maharaj Ji's guidance, thousands felt inspired to offer selfless service to those in need. He cleansed the impurities of the rituals and traditions, existed in the society that seeped over time, by encouraging dowry- fewer marriages, respect for women, education for all, care for old and destitute. He Himself set an example by taking care of leprosy patients and eating meals with the congregation. His motivational words had become both catalysts and symbols for the growing International network of Humanitarian initiatives.

Huzur Maharaj Ji was an epoch-making the personality, a perfect sage on the world-state with his indomitable spirit and exceptional zeal to transform the torn and tormented humanity into the peaceful global community, on the strength of divine knowledge and self-sacrifice. He promoted non- violence, communal harmony, detachment to material wealth, and devotion to God. Huzur had a deep passion for His country, India. His love for the motherland was beyond description. He quoted “To love one’s country is the adoration of the Almighty”. He also composed many patriotic songs, praising the motherland and inspired people to love and serve their country. His message of non-violence and peace aggravated extremists. Ultimately His Holiness along with His two devotees Baba Satwant Singh and Chacha Joga Singh were shot by extremists in Dormers wells High School. South hall in U.K. The sacrifice of a divine sant brought peace to the world.

“ Oh Lord shower the world with peace. ”
Blessings
" I have found the Lord within this human body and shared this precious jewel with all of you, so that you may spread this to the world. "

Your Light Enlightens Our Journey

His Holiness gave many blessings to this world, so that the people would get rid of their mental and physical sufferings, and would move forward to their spiritual journey.